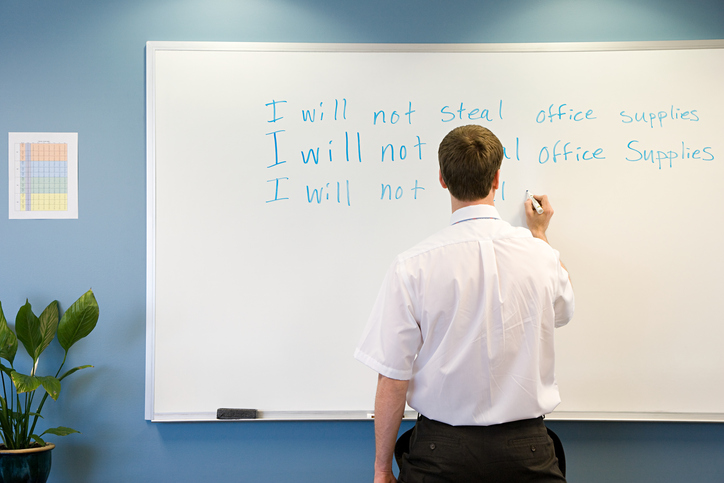 How Does Progressive Discipline Benefit The Company and Employees?

To often, behavioral problems and poor performance can be detrimental to the bottom line and many employers want to be rid of problematic employees ASAP. Small businesses in particular may not feel that they have the time or money to work on correcting bad behavior or improving poor performance. Additional supervision alone can be costly and a burden on already busy managers. Immediate termination often feels like the easier path, especially in industries in which it’s relatively painless to find a replacement. But, despite the ease of immediate termination, we generally recommend that employers first use progressive discipline.

Terminating employment always comes with risk, even when it’s done for good cause. A terminated employee might own up to their mistakes and understand the basis for their termination, but they might also cause trouble by claiming they were terminated for an illegal reason. This is where progressive discipline comes in handy.

As its name indicates, progressive discipline involves a progression of disciplinary actions with escalating consequences. When used to give employees with behavioral or performance problems time and opportunity to improve, it demonstrates good faith and builds your employer brand. And if the process results in termination, you can show the termination was for cause. Without a record of trying to correct the behavior or performance, it’s very easy for the terminated employee, a lawyer, or a jury to fill in the blanks with their own explanation for why the employee was terminated.

The Steps of Progressive Discipline
Progressive discipline generally begins with a conversation to identify and address the behavioral or performance issue. Often this conversation is part of a regular coaching or check-in with the employee, and some HR professionals view this conversation as a step before actual progressive discipline begins. You make the employee aware of their unsatisfactory behavior or performance, make your expectations clear, give them any guidance or tools available to help them succeed, and allow them to bring their concerns to your attention.

If the employee fails to improve after coaching, the next step is generally to give them a verbal warning and let them know additional discipline may follow if they don’t improve.

The next escalation is usually a written warning that the employee signs. If the problem is performance-related rather than behavioral, a Performance Improvement Plan (PIP) might be appropriate at this stage. A PIP is formalized action plan for employee improvement. It typically lasts at least 60 days, has commitments from both the employee and management, and contains realistic, attainable goals. Whether you give a simple written warning or implement a PIP, you should be perfectly clear as to what will happen if the employee fails to improve or modify their behavior.

4 Guidelines When Using Progressive Discipline
First and foremost, treat the steps in your progressive discipline process as suggestions, not as a formula that has to be followed in every case. Your employee handbook should have a policy that puts employees on notice that poor performance or bad behavior will lead to discipline, but it should not lay out a specific escalation process. If you tell employees that they’ll be subject to a certain set of steps or entitled to a certain process, they can hold you to that policy later and claim they’ve been discriminated against if they don’t receive the benefit of each step in the process. And there are of course occasions in which progressive discipline should not be used. Violence or threats of violence, for example, often merit immediate termination following an expedient investigation.

Second, it’s imperative that you document everything throughout the progressive discipline process. Even a verbal warning should be noted in the employee’s personnel file. If something isn’t in writing, it might as well not have happened.

“Terminating employment always comes with risk, even when it’s done for good cause… Without a record of trying to correct the behavior or performance, it’s very easy for the terminated employee, a lawyer, or a jury to fill in the blanks with their own explanation for why the employee was terminated.”

Third, if the conversation pertains to serious behavior issues like sexual harassment, it’s a good idea to have an HR representative or other manager in the room as a witness. If the employee later claims the conversation went down differently than it did, the witness can set the record straight. That said, if having a third party in attendance isn’t possible, just be sure to document the conversations. You certainly don’t need to refrain from progressive discipline just because you can’t get a witness for the meetings. On the other hand, if you’re talking to an employee about a performance issue, a third party generally isn’t necessary (unless you expect trouble). Having an audience present will likely be embarrassing for the under performing employee and won’t provide much risk mitigation.

Fourth, stick to facts. You’re disciplining an employee because they’ve done something wrong or poorly. Focusing on the facts of the case provides the employee with a clear path going forward and protects you if the employee later challenges you on any of the steps of the process.

Finally, be compassionate, but not apologetic, particularly if you’ve reached the point of termination. If you’ve followed your internal progressive discipline policy and the employee has failed to improve, the employee shouldn’t be surprised when termination occurs.

A progressive discipline policy can be an excellent tool for helping employers managing employee and avoid and defeat employment claims. To make progressive discipline policies successful, employers must make sure that the policy is tailored to its needs, that it provides enough room to deviate from the recommended steps when necessary, and that it is applied consistently to all employees.